I would like to dedicate this illustration to: the 70th anniversaries of D-day, the Gaza conflict, the school children massacred in Pakistan by Taliban gunmen and those suffering and dying from Ebola. This illustration is also to convey the meaning of one of the worst years for air safety, (6 aircraft incidents, the worst of which were MH370 missing and MH17 crashed). As well as these there was the Italian ferry fire for which at the end of 2014 the rescue is ongoing. The possibility of a terrorist attack that exists around us every day.  I really wish everything will be better when 2015 arrives. 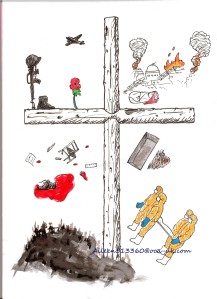