In this exercise, I was supposed to produce a Whitby seaside picture which I have done from a similar one like this.

I have drawn a sketch with pencils, then made it as a fine drawing. (It was a little more complex than I thought so I have to concentrate on it for a long time.) 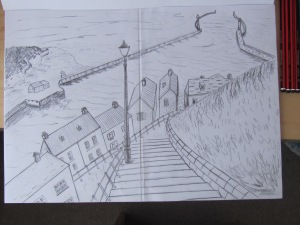 Step 1 Fold this A3 paper then scanned it twice then combined these 2 parts in one image.

I realised  the picture is probably better called seaside instead of sea because I put too many buildings in it. Then there were lots of details that were fiddly. I tried a little bit of cutting out, but made the shapes very difficult to stick on white paper. But I love this picture so I decided to carry on with it then cut off most of it only leaving a quarter on the top right side. I then enlarged it to A3 size and printed on 2 pieces of A4.

Step 3 I Blu-Tack my pieces down. The sea seems only to be a calm one, there isn’t any big waves.  Then I decided to pick up a few small pieces for the sea.

Step 4 I refined the picture but it does not seem to be any better.

I also tried starting off this way to make the image  more intimate but my technique is not good enough to finish it.

I lost control of what I was doing  and I feel it ended badly. I am not sure there are lines showing the small waves in the sea, grass or the building?  I can return to the bigger block to cut more off? It is legible  but I feel it is disjointed and not easy to understand.

Using black and white could get an amazing result. But my main problem was I probably should have used another style for sea waves. Then I think  it could be better.

Seoul-based illustrator Daehyun Kim http://www.moonassi.com/  I like this artist and the way they have conveyed a sense of souls and spooky.

http://adamszary.com/tag/cyberpunk/ the images are good for their readability, legibility and they are clear to understand.