First I have found a list of Dutch painters of the 16th century on Wikipedia:

This painting on first sight it seems to be at an ordinary still life concentrating on foodstuffs, there are a lots of objects and a scene with a biblical theme in the background. This painting hides a symbolic religious meaning, embodies and visual metaphor encouraging spiritual life.

Another two paintings of Pieter Aertsen. He uses a realistic and  naturalistic manner. His paintings are with a strong direct light coming from the top left to bottom right.

Then I am looking at the list of Dutch painters on 17th century.

The Dutch love to paint still life especially love to paint flowers. It  was an age where paintings were not solely the possession of the wealthy. Many different types were created.

Bartholomeus Assteyn was a productive artist and created noteworthy still lifes. I liked his painting technique for his treatment of the shadows and the parts in the shadow.

Johannes van der Beeck. This is a very carefully constucted picture. It seems there are diamond and triangular shapes, vertical curves and parallel lines. The shapes are the same sizes in opposite sides of the picture but have different colours. It also have rich reflection and surface elements. It is a steady and smooth still life. 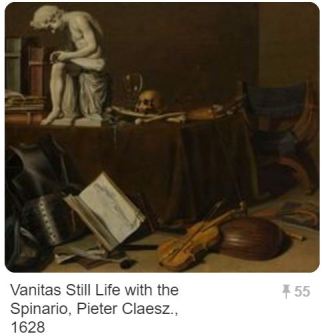 There is a subtle light infusing the glass ball obviously coming from the top left of the picture. I hope to learn to be able to draw these subtle patterns of light.

The Dutch painters of this era built their pictures up in set stages, this was sometime due to the use of a smaller pallet and limits in pigments. In later era of painting the picture would be painted as a whole.

Later painters such as Paul Cezanne produces their still lifes with more compression of forms and a dynamic tension between geometric forms. 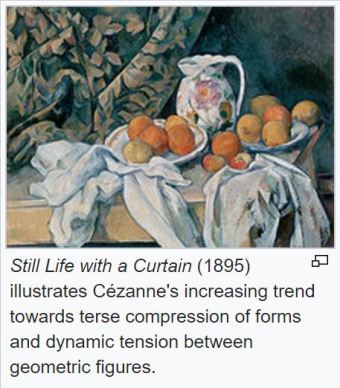 Cezanne changed the way way that colours were depicted in still life. Instead of imitating an object by lines a colours Cezanne was said to give a plastic and solid form to our nature.

These words are really illustrating my point  now because I was told by my teacher when I was 19 that a line is not just independent but needs to cooperate to form the greater whole of the picture.

Cezanne and the way he simplified geometric relationships and optical phenomena influenced may other artist at the beginning of the 20th Century. Among these were Picasso and Braque.

His paintings were affected by his travels during his life. He moved around to may countries starting with Peru as a child when his father was forced to leave France. His styles and interpretations were influenced by his travels and his own observations.

Picasso used colour as an expressive element but relied on drawing rather that the subtleties of colour to create form and space. He would add sand to his paint and often painted with common house paint. He also used artificial light or painted at night instead of using natural light.

These two paintings are from his crystal period.

Braque started off as a painter of landscapes but changed to still life because he found it a more tactile experience. He felt he could reach out and touch the manual space and manipulate the objects far more than you can with a landscape.  A still life was also more accessible, in relation to perspective than landscape, and permitted the artist to see the multiple perspectives of the object. 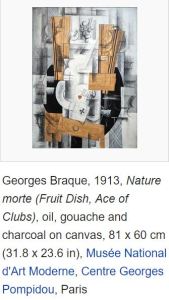 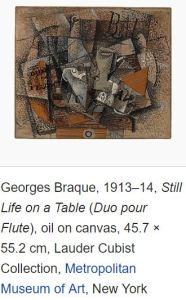 Bak is a surrealistic artist. He employs allegory, metaphor and certain artistic devices such as substitution: toys instead of the murdered children who played with them, books, instead of the people who read them. Samuel Bak’s paintings cause discomfort, they are a warning against complacency, a bulwark against collective amnesia with reference to all acts of barbarism, worldwide and throughout the ages, through his personal experience of genocide.

Wonner is best known for his still life paintings done in an abstract expressionist style.

Whether using single or an abundance of objects in his still life he controlled them all in  high-resolution and he used a specialized type of still life, showing inanimate and relatively flat objects that look vivid. 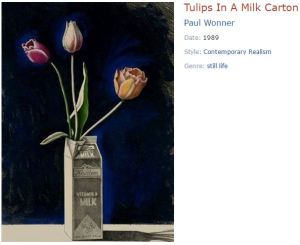