Now I am going to improve on my ideas.

I did more research about the illustrator John Holcroft. His style gave me lots of ideas.

Before I produce the seven images I need to decide the seven backgrounds which will emphasise the emotions of the 7 stages which are changing from curious to stress to nervous  to changes to confusion then pleasure.

The colours need to show nervous, busy, dangerous, changing from a peak to a flat surface to convey the emotions. The colours’ palette: A grid 7×4 to show the different colours.

1. Starting A New Job. I have done another thumbnail to show the ideas I wish to convey.

I have enlarged the lady’s head so that the words can be easily read on the cross-section of the brain.  I was thinking about how to show these thoughtful elements which is better the  figures or words? Then I have chosen the words. 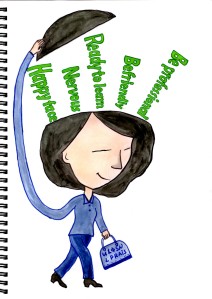 Then I changed the background to decide which would be the best for this image.

I am afraid the main problem is that the green words are not clear to read as I intended them to be. Also I could convey the face better but I lost sight of the elements with a simple face to draw attention to the words at the top.

Another try with a different background

With this I feel the words are a little bit better to read clearly.

I have done some more thumbnails again to help to find best idea. 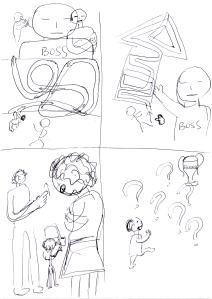 Then I have drawn a labyrinth to show when you start a new job and the big lady boss who may be smiling  but still give the new employee lots of stress to start. 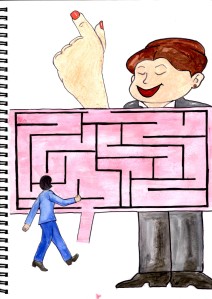 Then I added four colours to the background.

I chose the second one and changed it a little bit to match the last one and show more stress on the picture with the amber colour.

I have drawn a character’s face who watch, think then react to do the job. 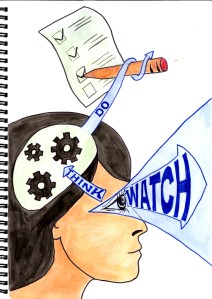 Then I added the background on it.

I like the second background colour which has a colour makes the foreground clearer.

I think I have drawn a sketch before which showed a nice idea for the image of work harder and smarter.

Then I have improved it to use my stage 4. In the first picture I thought to use a simple face which only has a nose on for the character but then I added eyes and a mouth because it is better to match with first stage. 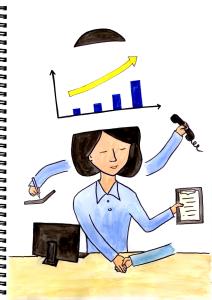 I am going to try 4 colours for the background

I am going to use the light red one